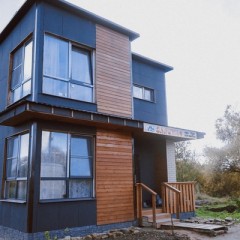 CSS Foundation Russia team, led by Chairman David Russell, visited the Bielsko-Ustyiensky orphanage for mentally retarded children in the Pskov region and Zaluzhie village. CSS financed the construction of houses for the accompanied independent living of graduates of the orphanage.

The meeting with children and young adults was held in a very warm and friendly atmosphere. The CSS team brought memorable gifts to each student, and the guys themselves prepared a delicious dinner and knitted warm slippers for the foundation employees. At lunch, guys talked about their successes and plans, about how their weekdays and weekends go, and even shared recipes for cooked dishes.

After that, everyone went to the Bielsko-Ustinsky residential care facility, where both students and graduates took part in master classes: girls learned to do manicure and styling, and boys did actual haircuts.
We said to each other “Goodbye” late in the evening, after a detailed tour of the boarding house and discussion of plans for further cooperation.

The Zaluzhie project is the third and final stage in a pilot social project in the Pskov Region to provide independent living for graduates of boarding schools for mentally retarded children. Before moving directly from the boarding school to your home, there are several stages: the selection of children ready for such a stay and the special training of independent living on the basis of the orphanage. Students who showed a high level of independence and self-care move to specially built houses in the village of Zaluzhye, located 6 kilometers from the orphanage.
The project was invented in 2014, in 2016 the construction of the first houses began with personal funds of pupils and private donations, but by the end of the year the funds were over and construction stopped until 2018, when private funds managed to resume work in only one house for girls. After moving to their home, the girls showed tremendous dynamics in development. Today they keep the house in perfect order, they know how to cook and calculate the necessary amount of products for this, they independently pay utility bills and fully service themselves. In the afternoon they work in their former orphanage, being an example and an incentive for the rest of the pupils.
The CSS Foundation funded the construction of a second home for boys, providing internal and external repairs to the building. In December 2019, students will already celebrate a housewarming party.